RACING TO THE END?

The Senses Novels deal with some uncomfortable topics. One of those is the elimination of people in much the way the Nazis did the Jews during World War II. Hitler hated, or at least gave the appearance of loathing, the Jewish population and wanted to eliminate them from the planet. This theme is carried to an extreme in the books.

What Nazi Germany was doing was the ultimate in hate crimes, and it got me to wondering about these types of crimes in our own country. I then read a BBC article on how hate crimes in the US have risen for the second straight year. That got me to thinking about not only the US but Britain as well. 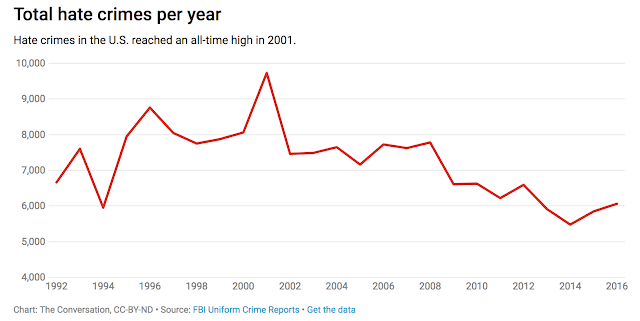 In the US in 2016 there were approximately 6,000 reported hate crimes according to the FBI Uniform Crime Reports. If the data is to be believed, the British Home Office said over 80,000 hate crimes were committed in England and Wales. That’s more than thirteen times the number in the United States! Why is this not front-page news all over the world?

Hate crimes, no matter what the reason; race, religion, gender or sexual orientation are unacceptable to me. If you have to resort to physically attacking someone based on these factors, how are you any different than Hitler’s SS, or Them in my novels?

I’m not saying that it is easy to love everyone, but isn’t that EXACTLY what we are commanded to do, “Love thy neighbor as thyself”? Hating someone because of the color of their skin is a foreign concept to me, I have never understood it. Hating someone because they believe differently than I do, the same thing (they are entitled to be wrong.) While I don’t embrace the idea of homosexuality in any of its forms, it’s okay to hate the sin, but I don’t hate the sinner.

Hate and hate crimes are one of the prime examples, to me, of evil at work in our world. We, as a people, can only overcome hate with understanding and love.

I pray you are having a great weekend!