In the Senses Novels, one of the subjects that I steer away from is that of Artificial Intelligence or AI. There is a good reason for this, as I don’t believe that there can ever be any such thing. Something is either intelligent, or it isn’t. If we change the description to ‘machine intelligence,’ I think we get closer to what people mean, but it still isn’t really accurate. Merriam-Webster’s dictionary defines intelligence this way:

(1): the ability to learn or understand or to deal with new or trying situations: reason also: the skilled use of reason

(2): the ability to apply knowledge to manipulate one's environment or to think abstractly as measured by objective criteria (such as tests)

When the average person thinks of or refers to AI, what they really mean is some sort of machine consciousness, or self-awareness. The realization that one is a separate entity, an individual. Not all life on Earth can be thought to be self-aware, microbes and single-celled organisms certainly aren’t. Self-awareness is considered, by science, to be a higher brain function. Everything that I’ve seen and read indicates that we are still as far away from creating a self-aware computer as we are from human interstellar flight. Still, people speculate what it would take to build a self-aware machine.

This year we will likely see that the single most popular Christmas gift is what is referred to as the ‘smart speaker.’ Amazon®, Google®, and Apple® all produce their own versions of these devices. The leader in the field, at the moment, is Amazon with its Echo devices. 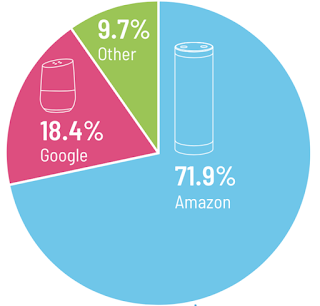 These devices have an upside and a downside. The upside is that they are usually instantly available to answer questions, control various electronics including lights, and give access to entertainment 24/7, all through voice commands. The downside is, this means that are listening for their ‘wake’ word all of the time. While we are given assurances that nothing is else is being ‘listened to’ or recorded, one has to ask questions in light of the recent Facebook revelation where they have given the data of over 2.2 billion users to Microsoft, Netflix, and Spotify, you can see that article here: https://www.foxnews.com/tech/facebook-gave-tech-companies-intrusive-access-to-users-private-messages-and-personal-data-internal-documents-reveal

Don’t get me wrong, I have several ‘Alexa’ enabled devices myself. Why am I not worried about the intrusiveness of someone ‘spying’ on me with the devices? First, I own a cell phone. Anyone that owns one of these marvels of the digital age has already abrogated all of their rights to privacy. Cell phones track your location and, if need be, the government can tap into most of them easily. The NSA has been collecting our conversations for years. Second, if anyone takes any action on anything that they may overhear via one of these devices, it will bring a firestorm of public criticism that no company (or government) can survive. Third, and most important, I was aware that we were living in George Orwell’s, “1984” as far back as 1980. It’s gotten more overt in the last few years. Politicians who use doublespeak and doublethink as part of their daily lives, the few ruling the majority through fear and lies, and, the daily push for even more control over our individual freedoms are all examples.

I like my Alexa devices, I find them fun and convenient. Will I ever fully trust that they are not being used to monitor me? No. Do I really care? No. It’s too late to worry about our privacy unless there is some kind of major shake-up of industry and government. Think about the article from Fox News on Facebook, why hasn’t Mark Zuckerberg and the rest of the leadership at Facebook been arrested and charged with violation of our fourth and fourteenth amendment rights? I know of at least one civil suit that has been filed, but why no criminal charges? It’s because the argument will be that by using their service you gave up those rights. The smug Mr. Zuckerberg firmly believes that he has a right to any and everything you put on Facebook, after all, he owns the service that you are using. Honestly, if you don’t want everyone on the planet to know, including the police and the government, why put it there at all?

I intend to enjoy my ‘smart speakers.’ Knowing the truth about them is liberating and should help you make your own decisions. By the way, if you don’t want something known, or don’t use them all the time, you can turn the microphones off on the devices.

I pray you are having a great week as we gear up for Christmas!