I have decided to do an in-depth review of the aforementioned ELEGOO NEPTUNE 2S 3D printer. This is the first 3D printer that I’ve owned and operated. I will be reviewing the printer based on several criteria:

1.    Delivery (does it come within the time-frame stated by the company.)

2.    Packaging (does the product come undamaged and is the packaging sufficient to protect it.)

My rating system is:

One Star – Very Poor, Run, don’t walk away from this.

Two Stars – Poor, not at all recommended.

Three Stars – Fair, there will be challenges you have to overcome.

Four Stars – Good, I can recommend the product.

For item one (1) delivery, the product was promised within five to seven business days based upon the shipping criteria that I gave them (free shipping.) The product was delivered late on day four, so they exceeded the expectation.

The item came in a heavy cardboard box, undamaged, with soft foam packing cut-out to hold the individual pieces. I consider it well protected. Expectation here was met.

We come not to item three, ease of assembly. This is where things go just a little off the rails. First, you need to understand that this printer comes only partially assembled. You are expected to do a lot of the assembly yourself. All well-and-good as this is one of the reasons that the cost of the unit is so low ($190 if you buy directly from Elegoo.) There are problems here though that Elegoo should address.

First is the User Manual that comes with the unit in the box. This is a terrible document and isn’t much help for someone who has never put one of these together before. The pamphlet is mostly pictures with confusing dialog. It is actually obvious that an engineer helped put this booklet together, not thinking about the novice. Fortunately, Elegoo was wise enough to include an assembly video on the TF card that comes with the unit. This is far more helpful when it comes to instructing you on how things go together. The problem here is that the video shows things going together at two, three, or four times the speed that they actually do. I found myself replaying sections time after time. This brings me to the second problem with assembly of the printer.

There are six different size screws (all hex head) and five different size hex wrenches to go with them. This, along with a couple of different crescent wrenches with three sizes. There are also six different sized connector ends that have to be plugged-in in various places, one so small that I had to use tweezers to get it lined up. Most of you reading this probably know that I am a Lean/Six Sigma Senior Master Black Belt. I can tell you that the concept of Design For Assembly (DFA) was nowhere present when this model printer was on the drafting table. It honestly is not that hard to set up to use a common screw (two at most) and a common connector (again, two at most.) In fact, it isn’t that hard to set it up that NO screws are needed, but that is advanced DFA and I would have been ecstatic with some of the basics. I want to make sure that you understand I have taught and implemented Design For Assembly/Design For Manufacturing at multiple companies in several countries including the USA, Mexico, Canada, France, Switzerland, and China. DFA/DFM has reduced costs for these companies by as much as 50%.

Finally, with the assembly, they leave you to figure out that little tricks you need to know to make things go together properly all on your own. Things like, keeping the nuts at the very end of the screws when putting the filament holder on. The problem is, these aren’t things that are just ‘good to know,’ they’re critical to getting the unit put together properly.

My rating on Ease of Assembly…Two-Stars.

Let’s move on to Ease of Setup. This was another area that needs some improvement. There are a couple of basic things that need to be done before you can start printing. One of the most important is leveling the bed (the area where the part sits as it is being made.) You would think this is pretty straight forward and, if you live in backwards-world, it probably is. Under the bed are four ‘wheels’ to help level the bed. Where I come from, when you turn a wheel right, you would expect something to go in or up…not the case here, this actually lowers the bed in that corner. I suppose if you are left-handed, this might be pretty cool, but according to Wikipedia, roughly 90% of the human population is right-handed. Again, a DFA issue. Once you figure that out, it is pretty smooth sailing for leveling the bed.

There can also be issues with the bed ‘wobbling.’ This is taken care of by adjusting some nuts under the bed…nuts that are ridiculously tight. I had some real fears that I was going to break something on the printer I had to pull so hard. Some simple adjustment knobs for this would have been nice, but maybe it would have added some cost to the unit as well. Once we are past these problems the basic setup is pretty much done.

My rating on Ease of Setup…Three-Stars.

Part prep is an important part of 3D printinig. In order to 3D print a part, you somehow have to get that part design into the printer. The Elegoo Neptune 2S does this through the use of a piece of software called Cura and a TF card. What Cura does is look for your model in a variety of formats (.stl, .gltf, .obj, etc.) and lets you manipulate size and orientation and then ‘slice’ your model. Slicing is putting the model into a series of ‘slices’ that the printer can use to build a part file in Gcode. This file can then be transferred to the TF card so it can be plugged into the printer for use. Seems simple enough. Except…there doesn’t appear to be anyway for you to manipulate other important data directly in the Cura program initially. Information like nozzle and bed temperatures. This is ‘hidden’ in a bar above the viewing stage. The manual for the Elegoo version of the Cura program is online (I had to search for it myself.)

Once the part is loaded into the Cura program, which is easy to do, slicing it is as simple as pushing a button. You then can load the sliced part back onto the TF card for use. I had to make sure that it was loaded onto the top menu or the printer could not find the part (you cannot load it into a file folder, at least I couldn’t, and have the printer find it.)

My rating for Part Prep…Three 1/2 Stars.

Printing the part, I initially had some issues. For some reason, the part would begin to print and then, after a few minutes, the entire thing would move on the bed ruining the printing. I went back and double-checked that the bed was level (a VERY big deal) but it made no difference. I then tried to contact Elegoo about it and what I should do, I will get to that later. Rather than waiting for an answer back, I resorted to asking a group on Discord that I am a member of. After describing the problem and my settings, I was told that my nozzle temperature was a little too cold and how to make the adjustment. I did this and, sure enough, the part stayed in place.

Print speed is highly dependent upon the size of the part you are printing the amount of ‘fill’ you are putting into the part (typically set at 15%,) and, I assume, the quality of the part, though I haven’t found a separate setting for this. I printed a part that was approximately twice the size of a normal miniature (my daughter wanted a unicorn) which took about an hour and a half. I consider that fairly fast. Actual miniatures can vary from fifteen minutes to a half hour. I have seen and heard about other printers and how long it takes, so I consider the Elegoo fast.

The Noise that the Elegoo Neptune 2S makes is minimal. In fact, it is the quietest printer I have encountered to-date (we had a 3D printer at one of my work places and the noise would drive you nuts after a while.)

We finally come to Final Product Produced. The printer does make a nice part. The parts require a lot of trimming as the base is too wide and there are a lot of stringers. Overall, though, if you keep an eye on what it being made, you can get a really nice part off of the machine. Like all filament printers, it will not give you very fine detail, but it does as good a job as any parts I have seen from filament printers. There is one problem, and it is not an unusual one for any printer.

Getting the part off of the bed is difficult. This seems a little ironic after the initial problem of not getting it to stay in place. There are some ‘tricks’ that help. One is to heat the bed to about 70 degrees C and then use a can of compressed air on the part to cool just the part. You can then use a good flat spatula to get the part up. Just be careful as these parts are fairly fragile.

I am going to rate Final Product Produced at…Four Stars.

I need to talk about Elegoo customer service. This is what drags the overall rating down the most. The only way to Elegoo is through their email client. This means that you are going to have to wait hours (at least) before you hear back from them. When you are in the middle of a problem, you really don’t have that kind of time. I asked them about the problem of the part not staying in place on the bed. The response (several hours after I was done) was to clean the bed with alcohol and level it. This was actually an incorrect response since the solution was to increase the nozzle temperature. Imagine if I had to go back and forth with, “That didn’t work.” “Well try this.” It would have been ridiculous considering the time factor involved. This is always the issue when you are dealing with customer service located either in a different country or massively different time zone.

The only way that can see to overcome some of these problems is a better trouble-shooting section in their manual (they have one, but it doesn’t cover a lot of the eventualities possible) or online. I have had to help create these types of systems, so I know it can be done.

I am going to have to rate Customer Service at…One 1/2 stars.

My overall rating for the Elegoo Neptune 2S printer is 3.8 stars.

It is probably a decent printer for someone just getting into 3D printing, but there are obvious issues that Elegoo should address.

Since, as you know, I am careful about copyrights, I am only going to include a couple of pictures of finished products and not the printer itself. 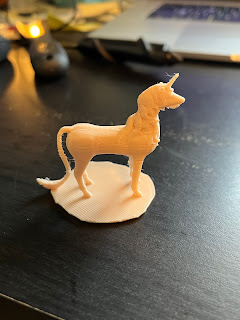 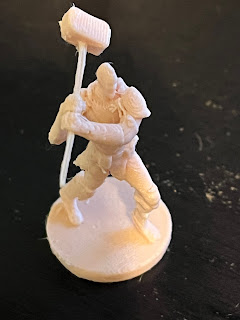