I know that some of you are getting impatient waiting for me to finish book five of the Senses Novels. I assure you that I am working on it, albeit slower than I had intended. I ask you to please be patient and remember that I have to work a ‘day job’ too that often requires extensive travel. While you might think that this would allow me time to do more writing, the truth is, apparently there is only one place where I am really inspired.

To help compensate just a little, here is a chapter out of 7th Sense to help whet your appetite and keep you interested. Please keep in mind that this has not been through my editor as yet.

We knew each other before our birth, only we didn't realize it then because each of us thought there was only one, not two. We were born on July 30 at 20:33 GMT, 3:33 PM Eastern Standard Time in the United States and 5:33 AM Japanese Standard Time in Japan.

The two of us are identical in every respect, our retinas, fingerprints and, intellect. It is completely impossible to tell us apart. With one possible exception.
When we are not ‘together,’ our brainwaves, while often mimicking each other, may not be exactly the same. This all changes when we become We. When We are one, our brainwaves are the same.

The two of us are separate and forever together.

This becomes even more perplexing when you realize that our parents are in no way related. My family, Violet's mother and father, are fourth-generation Japanese Americans and Sumire's family always lived in Japan. Sumire was born at Tokyo Medical University. I was born at St. David's Women's Center of Texas in the city of Austin.

No, we are not artificially implanted eggs, and we are not clones. We are the impossible.

We possess several talents or abilities. We will speak of those in a little while.

It used to be hard for us to know precisely where one of us was at times, for us everything is overlaid with everything else. Let me give you an example: I (Violet) will reach for food on a table, only the meal is sitting in front of Sumire in Japan.

Imagine, two brains with one mind, this is We. Our lives would seem to have been unmanageable as the two of us had to learn to separate our actions while seeing everything from both perspectives. This was so difficult it became an imperative that we be physically together.

As I said, We are often thought to be crazy when. We sometimes appear to converse without anyone else being present. Isn’t that a sign of insanity, talking to and answering yourself?

We’ve each been tested for schizophrenia many times. The doctors are always at a loss since. Sumire and I started doing this from the moment We gained language at the age of three months.

The professionals believe it caused by something biological (well, that’s true) and schizophrenia is one form of insanity that manifests itself physically in the brain. While neither of us ever demonstrated the physical characteristics of the disease, that didn't stop the doctors from what they did to us later. I am not being purposely mysterious, it is just that if I don't do things in order, We, together, lose track of when We are.

Some think We are intellectually deficient since We often seem to react to things that make no sense to the observer, laugh at some unheard joke, run to catch something that isn’t there, that sort of thing. To think this is a mistake. The truth is our respective I.Q.s are 137.

Our I.Q. as We isn’t just multiplied, it is an order of magnitude beyond our individual I.Q., think 137 to the 137th power. One problem that We have as We is that, individually, We answer a question with a statement or question of our own that has nothing to do with the original question. We are often responding to something that only one of us was asked.

We also run into walls and trip over obvious things in our way. We stare off into space while We try to 'talk' with ourselves and We have odd sleeping patterns developed because of the time differences.

Our parents thought us, savants. Sumire spoke and read English and me, Violet spoke and read Japanese at the same time We learned our 'native' tongues. This happened, without evidence to the rest of the world of either of us having been taught the second language.

If you are someone who is having trouble with our improper use of language and syntax, we are more often We than not. This means there are sometimes no words to describe our joined state.

There are times, of course, when we find it necessary to be only one. This is much harder for us now than it used to be since we found each other. It is like cutting ourselves in half. Both of us are told our voices in those instances seem to go flat as though part of the life goes out of us.

We laughed when We heard that.

Now is a good time to tell you about our other abilities.
How many senses do you think that people have? If you said five or even six, you are wrong, oh so very wrong.

I hope that you enjoyed this first chapter of 7th Sense, and I promise you that I am working to finish the novel as quickly as I can. Please keep in mind that the working title and cover art may change.

Have a great weekend! 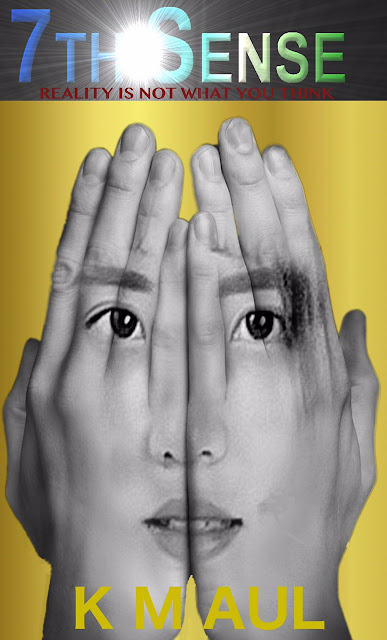