THE DISCUSSION NO ONE WILL HAVE

In the Senses Novels, I try to portray the world before and after cataclysmic events that have purposely been engineered to reduce the human population. It is an ‘end-times’ series that reflects much of what is happening today. Unfortunately, a lot of my material comes from what has happened is happening in the world around us.

If you are a regular reader of this blog, then you already know my views on the subject of the murder of the unborn. But, the carnage doesn’t stop there. Seven states now have legalized physician-assisted suicide, and more are attempting to gain it. A small percentage of doctors in the U.S. have gone from being healers to being corporations concerned only about money. PLEASE BE SURE THAT I AM NOT TALKING ABOUT ALL DOCTORS, ONLY THOSE THAT PUT PROFIT BEFORE PATIENTS.

This is from the third paragraph of the Hippocratic Oath:
I will use treatment to help the sick according to my ability and judgment, but never with a view to injury and wrong-doing. “Neither will I administer a poison to anybody when asked to do so, nor will I suggest such a course. Similarly I will not give to a woman a pessary to cause abortion.” I did not correct the grammar as I wanted to take the translation precisely as it came.

What, exactly, did I miss there? Why do some doctors today look at the Hippocratic Oath the same way that liberals look at the Constitution, an old piece of paper that means nothing? It used to be that every doctor in this country would recite the Hippocratic Oath, even if only to remember the roots of medicine. What has led us down this path? Where and when did we veer away from the concept of life being sacred?

The thought of doctors being assembly line murderers isn’t new. We only have to look as far back as World War II to see it. Nazi Germany took it to a horrifying level. I know that the small number of doctors that I am referring to in our country won’t like being compared to the Nazi’s of old, but how are those that kill for money any different?

I hear radio ads about overpopulation. We are besieged with how wrong it is for people to have to suffer and how it is a kindness to ‘help them along.’ It’s all nothing more than justification for killing.

Jack Kevorkian was and, in many ways, still is the poster boy for assisted suicide. He even went so far as to show people how to make do-it-yourself suicide units. The irony is, Kevorkian died of ‘natural causes’ at the age of 83. Kevorkian believed that people had the right to choose whether they lived or died. From what I can tell, he didn’t care what your reasons were, he just wanted to show you how to do it or help you do it. Kevorkian was a medical pathologist, a doctor. Enough of a murderer that he spent eight years in prison for it.

No one wants to suffer, and no one wants to think that they will live on without their memory. That does not make it right for a doctor or anyone to help you kill yourself. Don’t get me wrong, I understand the intellectual and emotional reasons for wanting end one’s life. But, no matter what justification you give, it is still the ultimate sin. You are throwing the gift of life back into the face of God and saying that you don’t want it on His terms.

As far as the overpopulation question goes, we are approaching seven and a half billion people on this planet. ~330,000,000 of them live in the USA. Unless my math is off, that is less than 5% of the total. China has 1,384,688,986 or about 18.5% people and India has 1,296,834,042 or about 17.3%. In China, assisted suicide is illegal under Articles 232 and 233 of the Criminal Law of the People's Republic of China. Forms of active euthanasia, including the administration of lethal compounds, illegal in India. Why are we so concerned with killing off people here when it’s obvious that no one else cares? And lest anyone think that we are running out of room, there is 15.77 billion acres of habitable land on the planet, a lot of which is still not touched.

Just for reference, I thought that I would include a chart so that you know why people die in this country: 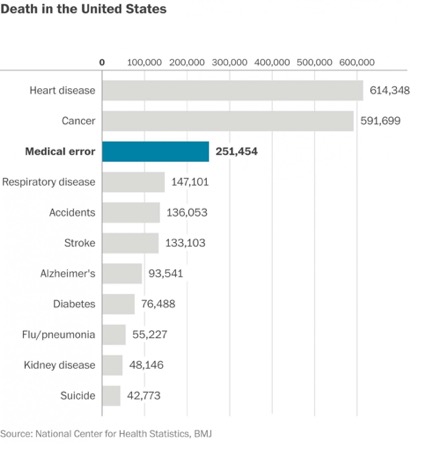 Don’t we have enough accidental medical death? Do doctors need to go out of their way to purposely kill as well?