In Synesthesia, the fourth book of the Senses Novels, our hero, has some off-screen interaction with Paul of the New Testament. Eli doesn’t have a very high opinion of Paul at the time. I have been accused of not liking Paul, myself. So, I decided to take some time to examine my feelings about the man once known as Saul of Tarsus.

It’s true, I am not overly fond of Paul, but it isn’t his fault. In fact, it has nothing to do with anything he did or wrote. While what went into the New Testament was a gradual process, taking centuries to finalize, it had its real start at finalization at the First Council of Nicaea in 325 A.D. This raised a question in my mind, why the letters from Paul and not some of the other ‘Gospels?’

The answer became obvious when I look back and remember who Paul was. Paul was known to be the Apostle to the Gentiles. That is significant.

One of the comments made by Jesus Himself was that he came to save His own people, the Jews. Don’t get me wrong, there is plenty of evidence to show that God doesn’t want anyone to ‘perish.’ Still, while He was never ‘mean’ to the Gentiles, you can see Jesus’ attitude in several places, Matthew 15:26 is one. Near the end of His time with the Disciples, Jesus made it clear that they were to go and preach the Good News to everyone, Jew or not.

Let’s get back to my main point. Because of who was putting the New Testament together, it is necessarily biased. I am sure that has raised the hackles of more than a few of you. Still, it is the truth. Including Paul’s writings and excluding some of the other books that could have been put in shows a leaning toward making sure that the New Testament was geared toward the gentile and not the Jew. And, while it was, I am sure divinely inspired, it was done by men. Unfortunately, this has had serious side-effects throughout history.

I have told you before about the people I encounter that have no idea that Jesus was Jewish. They are serious when they tell me that. It’s never really preached from many pulpits. Why would it be? The intended audience for most sermons are not Jewish, they are gentiles, and the message is necessary to and for them. However, this ignorance has led to the Jews being persecuted even in our own country. I was born and raised a Jew. I became a Christian later in life, but I experienced the hostility that many non-Jewish people have toward those of that faith. One of the favorite misconceptions that are used against the Jews is that they killed Jesus Christ. The Romans executed Jesus. But ask yourself this question, where would you be, spiritually, if they hadn’t?

Almost 30% of the New Testament are the words of Paul. That’s a lot for the one Apostle given a charge by the Lord in the Bible, who never knew Jesus as a living, breathing man. His words are important and what he wrote to the churches give us an insight into the truth of Jesus and God.

Understanding this has helped me to erase some of the uneasiness that I have felt about Paul for many years.

Have you seen the new cover for AURA, the first book in the series? It looks fantastic! 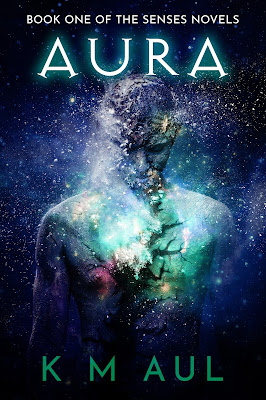