FOR SUCH A TIME AS THIS

In writing, there are seven basic plots, everything else is either a combination or spinoff from these:
·      Overcoming the Monster: The hero must defeat a force that threatens them and/or someone or something they care about.
·      Rags to Riches: Our character is poor, but manages to acquire wealth, influence and/or love, loses everything and gains it back.

·      The Quest: The hero sets out to find something important or to get somewhere specific. Along the way, they face obstacles that are designed to sidetrack them.

·      Voyage and Return: Our character travels to new places, and, after overcoming danger, they return with experience.

·      Comedy: This can be a fun and humorous character with a happy or cheerful ending or a dramatic work in which the central motif is the triumph over adverse circumstances, resulting in a successful or happy conclusion.

·      Tragedy: The character’s flaws or great mistake becomes their undoing.
·      Rebirth: Some traumatic event forces the main character to change their ways and often become a better (or worse) person.

In my series, The Senses Novels, there are six individuals faced with an implacable enemy and overwhelming odds in an adventure that spans over two-thousand years. In other words, the story is a mixture of many of these basic plots. Ultimately, the novels boil down to one central theme, people doing what is necessary regardless of the danger to themselves.

If we look back in the Old Testament, we can find a parallel. In the book of Esther, Mordecai, her uncle learns of a plot by Haman to kill all the Jews. Horrified and dismayed, he tears his clothing and pours ashes on his head (a sign of mourning) and sits in front of the palace where Esther has been crowned queen. Mordecai wants Esther to know what is happening and go to the king to ask for help. Esther hears about Mordecai sitting outside and sends one of the servants, Hathak, to find out what is going on. We pick it up in Esther 4:9

9 Hathak went back and reported to Esther what Mordecai had said. 10 Then she instructed him to say to Mordecai, 11 “All the king’s officials and the people of the royal provinces know that for any man or woman who approaches the king in the inner court without being summoned the king has but one law: that they be put to death unless the king extends the gold scepter to them and spares their lives. But thirty days have passed since I was called to go to the king.”

12 When Esther’s words were reported to Mordecai, 13 he sent back this answer: “Do not think that because you are in the king’s house you alone of all the Jews will escape. 14 For if you remain silent at this time, relief and deliverance for the Jews will arise from another place, but you and your father’s family will perish. And who knows but that you have come to your royal position for such a time as this?”

15 Then Esther sent this reply to Mordecai: 16 “Go, gather together all the Jews who are in Susa, and fast for me. Do not eat or drink for three days, night or day. I and my attendants will fast as you do. When this is done, I will go to the king, even though it is against the law. And if I perish, I perish.”

I have said before, The Senses Novels are written on many levels. They are a modern version of the book of Revelation, an allegory, a classic good versus evil story, and many more. Ultimately, they are a pointer to who and what we are or may become.

I have no way of knowing what battles you face or are currently in. You may have physical or psychological challenges. You might be struggling in the area of finances, politics, ethics, or law. What I can tell you is, no matter what you are fighting with or against, courage, honesty, and dedication to God will get you through. We are all here for a reason. There are no unimportant people in this world.

What is the plot of your life right now?

Each of us has been placed here to take a stand. He has put us in this time and place for such a time as this.

On December 20, 2019, and until December 25, 2019, the entire Senses Novels series will be available as an ebook boxed set for an incredibly low price ($9.99.) If you haven't read this series yet, this is your chance to get the set for almost half off. So that you don't miss this one-time opportunity, you can pre-order the set here:

Remember, this offer will only be available until Christmas 2019. 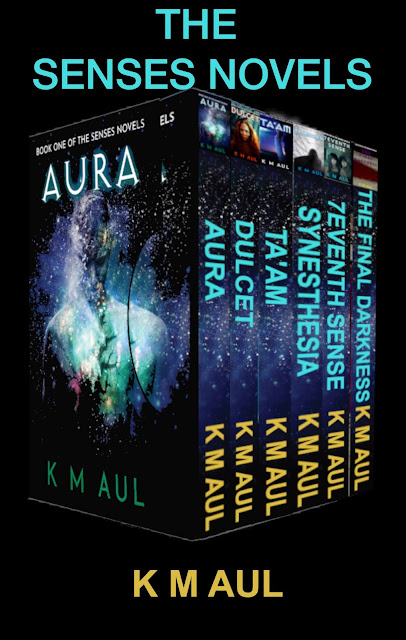