In book five of The Senses Novels, 7EVENTH SENSE, prophecy plays an important role. That role is even more significant in the, soon to be released, final volume of the series. After many years of discussing prophecy with both Believers and non-believers, I am convinced that most people do not understand what prophecy is nor its purpose.

One source states that there are 1,817 prophecies in the Bible, both Old, and New Testaments. Prophecy, simply put, is a brief glimpse into the plan of God given to man for the purpose of instruction. One of the qualifications of a prophet is that their prophecies are always one-hundred percent correct, they always come true. This would seem to leave Jonah out of the picture as he prophesied to Nineveh that they were about to encounter the wrath of God. By their heartfelt repentance and submission to God’s will, they were able to change the outcome. It goes like this in Jonah 3:

Jonah 3: Then the word of the Lord came to Jonah a second time: 2 “Go to the great city of Nineveh and proclaim to it the message I give you.”

3 Jonah obeyed the word of the Lord and went to Nineveh. Now Nineveh was a very large city; it took three days to go through it. 4 Jonah began by going a day’s journey into the city, proclaiming, “Forty more days and Nineveh will be overthrown.” 5 The Ninevites believed God. A fast was proclaimed, and all of them, from the greatest to the least, put on sackcloth.

6 When Jonah’s warning reached the king of Nineveh, he rose from his throne, took off his royal robes, covered himself with sackcloth and sat down in the dust. 7 This is the proclamation he issued in Nineveh:

“By the decree of the king and his nobles:

Do not let people or animals, herds or flocks, taste anything; do not let them eat or drink. 8 But let people and animals be covered with sackcloth. Let everyone call urgently on God. Let them give up their evil ways and their violence. 9 Who knows? God may yet relent and with compassion turn from his fierce anger so that we will not perish.”

10 When God saw what they did and how they turned from their evil ways, he relented and did not bring on them the destruction he had threatened.

If you read further on, Jonah is pretty unhappy about this and wishes he were dead. God has a friendly little chat with Jonah and straightens him out. The problem remains, was Jonah a prophet since what he prophesied did not happen? The answer is simply yes. God changed the outcome because of human free will. The Ninevites made the decision to repent and change their ways. This is also one of the purposes of prophecy, to give us a chance to alter our path toward self-destruction.

We read in the Old Testament, over and over, how the prophets tell Israel how something terrible is going to happen to them because they have abandoned God. The prophets are specific as to what that destruction will be, and then, since the people don’t change their ways, it happens precisely as they predicted.

Some people are given the gift of prophecy even today. There are also some who claim to have that gift who are false prophets looking to gain some kind of advantage (money, power, etc.) Many of the things that I have written in the earlier books of the Senses Novels series have come to pass, but that does not make me a prophet, it makes me someone who can view current events and extrapolate the potential outcomes.

On a general basis, I know how specific groups of people will react to certain situations, and it isn’t hard for me to see, where, and how events will unfold. There are always erratic people who can throw these predictions off, I try to factor them in. Radical Left, Radical Right, Centrists, Libertarians, Survivalists, Globalists, Nationalists, Socialists, Communists, Capitalists, and all the various religions and factions within those religions are things I try to take into account when I look ahead. I have stated this in many of my previous posts, one thing that all of these groups have in common is that, to some measure, they seek to control the populace, that’s us, all of us. The cry, “My view is the only right view!” may not be stated, but it is definitely implied, and all groups use it to help divide us more than we already are. Understanding this, using this as a baseline, it isn’t hard to look at specific events and see a month, a year, or even ten years ahead and where it will lead. That is not prophecy.

The prophecies in the book of Revelation may or may not have already started. I am not removed enough from the situation to tell you for sure. Do I believe that they are or will happen? Yes, I absolutely do, because there is nothing in there that is out of the realm of what we already know is possible. The Senses Novels are, in effect, my attempt at a modern view of how Revelation will play out. This is evident in book five, and will become much more so in book six, “The Final Darkness.”

I hope everyone is having a great week so far! 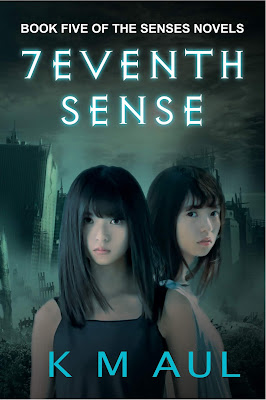